But what’s new about this? Does it mean that all the other cameras that are not called mirrorless have a mirror?

Not exactly, there is a bit of marketing behind this term, mirrorles was used, and is still used, in contrast and to differentiate from the DSLR also known as reflex, that is, cameras with features similar to dslr but its main differentiator with respect to these is the absence of the mirror in the body.

AND WHAT DOES A DSLR CARRY A MIRROR?

Digital Single Lens Reflex or reflex for friends. In short, they are cameras in which the image that you see through the viewfinder comes from the light that enters through the lens and is reflected in a mirror that is between it and the sensor (which rises when taking the photo), which guarantees that what we see through the viewer is what will be captured in the photograph (if the viewer has 100% coverage). 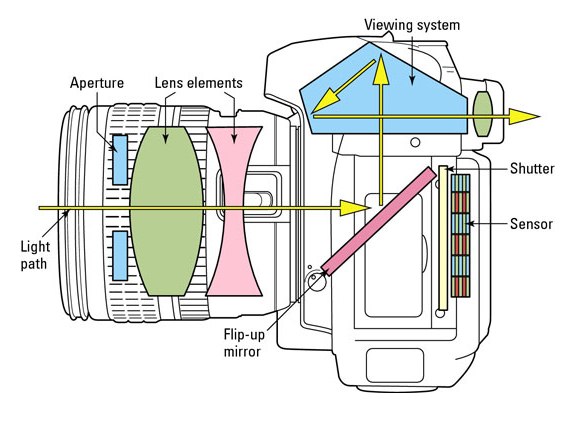 The yellow line in the image above describes the path of light in a reflex camera.

In the following image you can see both systems

How you can appreciate the light path in the mirror cameras is simpler than in the reflex cameras. The removal of the mirror results in more compact bodies between the optics and the sensor (which does not imply that they are necessarily smaller).

WHAT OTHER IMPLICATIONS DOES THE MIRROR ELIMINATE?

SOME EXAMPLES OF MIRRORLESS CAMERAS